There are lots of different types of parks out there. State Natural Areas, State Parks, National Forests, National Parks, Wildlife Refuges, and so on. What is the difference between all of them? What can you expect from each type of park?

What is the difference between a State Natural Area and a State Park? The difference is mostly up to the state government’s goal for that area. In general, however, state natural areas focus more on the preservation of the area, and thus have more restrictions and less human development, while state parks typically have more amenities such as bathrooms with plumbing, camp pavilions, developed campgrounds, etc.

The confusing thing is that “natural area” means different things to different states, and even from one “natural area” to another within the same state. Let’s dive in and see some examples and get a clearer picture of what the differences are from state to state.

Differences between Natural Areas and State Parks From State to State

Each state in the U.S. have protected parks managed by the state government. While practically all states have parks called state parks, only some of them also contain what are called natural areas.

Let’s look at the differences for Texas:

Texas Natural Areas function and appear very similar to state parks, but differ in their missions. Texas State Natural Areas have the primary focus of preserving the natural environment within the park so nature can exist in that area indefinitely.

Because of this, providing recreation is a secondary focus for Texas state natural areas.

As an example, Government Canyon, a Texas state natural area 20 minutes from San Antonio, is open only 4 days of the week. Furthermore, Government Canyon will close its trails frequently after rain, to prevent hikers from accelerating erosion.

Government Canyon is a natural area because it is meant for preserving the natural landscape, and this particular natural area is shielding another important asset: water. Besides being a shelter to allow nature to take its course, San Antonio’s aquifers are recharged in the park which provides water for the city.

Another thing that differentiates Texas State Natural Areas is that many of them are staffed at all–other state natural areas across the U.S. are only designations, and are not staffed at all.

Texas natural areas still typically have amenities, but don’t have as many, generally, as state parks. For example, even though Government Canyon is much larger than the nearby Guadalupe River State Park, Government Canyon only has 25 campsites, while the Guadalupe has 94 campsites. The purpose of the natural area is only secondarily to provide recreation.

Furthermore, many campsites at natural areas do not have plumbing and electricity, and are “walk-in”, thus are not suitable for RVs.

Although it’s not unheard of to find flushing toilets at a state natural areas, your chances are higher that you will be using an outhouse, or perhaps a composting toilet instead. See my post here if you want to know if composting toilets are safe, and my other post to find out if they stink.

At the last natural area in Texas we stayed at, all the campsites had a lantern hook and a campfire pit, and a portable outhouse at the car park, and that was the extent of the amenities.

Texas state parks have a primary focus of conserving the natural environment so it can be utilized safely for human purposes for the indefinite future.

That being said, the feel of state parks can be very different than natural areas, and you can get the impression that the primary focus is providing recreation for visitors, although it’s very important to state parks to conserve the nature and ensure that it will last for the indefinite future.

For an example, Guadalupe River State Park, another park near San Antonio has significant differences than its neighbor Government Canyon Natural Area.

Guadalupe River State Park is open every day, and it’s campground layout is much more dense. Although they have several walk-in campsites for tent campers, they have many more water/electric campsites, which allow for RVs, for a total of 94 campsites.

Let’s look at some differences for Colorado parks:

The purpose of Colorado “Natural Area”s is summarized in their mission statement:

To identify, evaluate, and support the protection of specific examples of natural features and phenomena as enduring resources for present and future generations

These natural areas are not necessarily open to the public. While many of these natural areas that the state of Colorado has stated are under protection, some of them are privately owned, while others are under the B.L.M. Visitation, therefore, is completely up to the property owner.

Thus, unlike Texas, where all designated “Natural Areas” are owned by the Texas state government, and typically have some level of public access and facilities, Colorado “Natural Areas” are simply designations put in place to protect the nature in that location. These two interpretations are very different, although they share the ultimate goal of preserving the natural landscape, including the plants and animals of the park.

Furthermore, within Colorado in the city of Fort Collins, they have a city-wide program for designating “natural areas”. These natural areas are almost all accessible by the public and have some level of amenities.

Fort Collins is not an exception even though their designation may be under the name of “natural area”, it’s a goal for many cities within the state of Colorado to have wide open spaces of undeveloped land that are open to the public, although many have restrictions of where you can hike. These natural areas differ in amenities–some not having parking or restrooms, but they all share the same purpose of beautifying the area, preserving the natural landscape, and creating recreational opportunities for visitors.

Similar to Texas, Colorado has created natural areas to protect specific areas to ensure the nature contained will last.

Colorado has 41 state parks. Similar to Texas state parks, Colorado state parks vary in their amenities and what is available to do.

For example, many Colorado state parks offer opportunities for camping, hiking, rock climbing, river rafting, etc. These amenities are similar to state parks across the U.S., and the popularity of an area usually dictates the level of amenities.

The goals of natural areas from Minnesota’s Department of Natural Resources:

Primary — Ensure that Minnesota’s natural heritage is not lost from any ecological region of the state.
Secondary — Provide compatible nature-based recreation, education and scientific research opportunities.

Hunting, fishing, horseback riding, and even ATVs are allowed in some Minnesota natural areas.

Although there are some restrictions on these natural areas, you are generally on your own to follow them without close supervision, as you would experience in Texas state natural areas, for example.

Texas only has a very small percentage owned by the federal government (a major portion of that being Big Bend National Park), and thus Natural Areas are almost exclusively owned by the Texas government. Therefore, it’s a little different than many other states because Texas natural areas have a bit more development and facilities than other states’ natural areas.

These are just three examples–every state will interpret the term “natural area” a little bit differently. In general, though, don’t expect the same amount of activities to do like at a state park. Natural Areas’ purpose is to preserve, therefore the hours may not be as consistent and the availability of trails and other activities may not have the same availability.

link to How Long Does a Sleeping Bag Last?

Trying to find out how long you'll be able to use your sleeping bag? You're in the right place to discover how long a sleeping bag can last and what you can do to keep it in great shape for as long...

Continue Reading
link to Stinky Sleeping Bag Even After Washing? How To Fix

A stinky sleeping bag can be a real hassle. Find out how to get rid of the stink here! If your sleeping bag still stinks after washing, you can try a cleaner that is more specialized for... 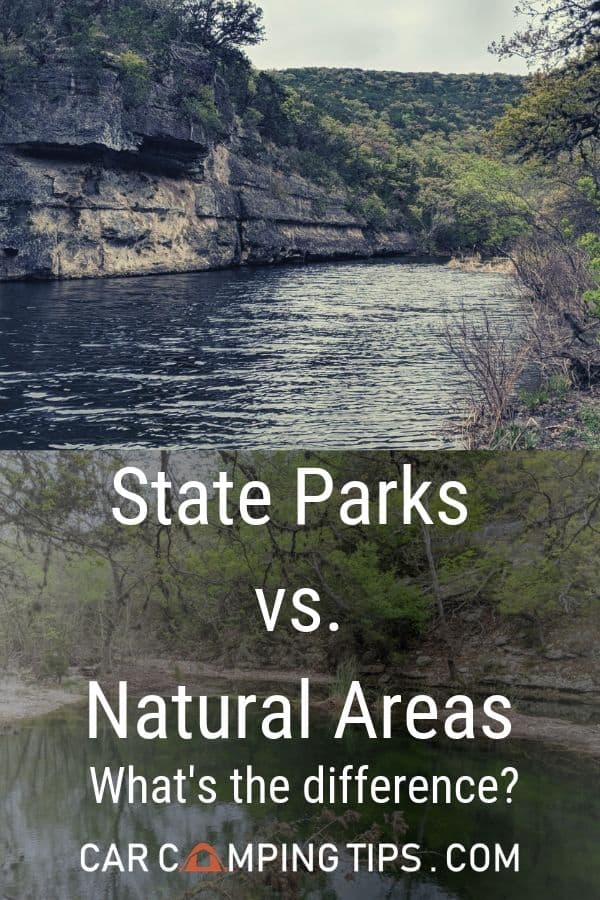