No matter how much you like to rough it when you go RVing, there really is no denying the importance of your RV battery. It’s a vital part of your vehicle’s internal operation. Your RV battery powers everything you find inside your rig. This is why it’s important to keep it charged and properly maintained.

RV Batteries are designed to be charged while on shore power. Many brands including Fleetwood, Winnebago, and Forest River require leaving the battery disconnect switch ON while plugged into onshore power in order to charge the house batteries. RV Engine batteries may or may not charge when plugged into shore power.

Note, your chassis battery system (the batteries that start your engines and run the vehicle portion of your RV) are not charged (typically) by shore power and are meant to be charged by running the engine.

Yet there are several things you have to consider before connecting your battery to shore power. Read ahead to learn all there is to know about your RV battery.

How To Charge Your RV Batteries From Shore Battery

Before you hook up your RV to shore power, there are several things you have to do first to ensure the safety of your RV.

The best way to ensure you’re letting in the best amount of power is to use a surge protector. Some RVs have surge protectors already built-in, some don’t.

A surge protector determines whether the RV shore power is clean and steady before letting it pass through to your RV. While they’re not required, they help safeguard the integrity of your RV’s electrical system.

It’s worth mentioning that when you use a surge protector, you’ll notice a delay in the power reaching your RV. This can last anywhere between 20 and 60 seconds (sometimes even up to 3 minutes!). This is the time needed by the surge protector to assess the safety level of the power going into the RV.

After you’ve taken all the precautionary safety measures, it’s time to let your battery charge. To do this, you have to turn on your battery. Many RVs have a Battery disconnect switch. You want the power to be ON–this will allow the battery to receive charge.

When you’re hooked up to shore power to charge your battery, you can opt for a battery charger or a converter. Let’s talk about the differences:

A battery charger allows your battery to automatically start recharging once it’s connected to an external power source. During this time, your appliances won’t receive any power.

You can still power any appliance that requires minimum power. However, it’s recommended that you turn off appliances that require the most amount of power.

Battery chargers are designed this way to prolong battery life.

A converter can convert 120-volt shore power into 12-volt DC power. This gives your battery a chance to rest while it’s plugged in.

In other words, all your appliances that are powered by the DC power system will work via shore power. During this time, your battery can get some rest and relaxation before you power it back up when it’s time to get back on the road.

Does the RV Engine Battery Charge When Connected To Shore Power?

Sometimes your RV engine batteries will charge on shore power and sometimes not.

Although many motorhomes are wired to share power from the house battery to the engine/chassis battery, but many motorhomes, (especially smaller or older motorhomes) do not. If your batteries are not wired together with something similar to a B.I.R.D. system then shore power will not charge your engine batteries.

There are a few options, you can install a B.I.R.D. system, but know that it will require you to rewire some of your battery electric system. A simpler solution is to purchase a Trik-L-Start (or its big brother, the Amp-L-Start) from their website, here. The Trik-L-Start wires the engine battery to the house battery to get some of that sweet, sweet shore power.

See what a B.I.R.D. looks like and how it works, here (from Intellitec).

If you aren’t sure, make sure and check with your owners manual whether your particular model has a house/chassis battery power distribution system. If you bought your RV used, it’s possible the previous owners modified the battery system so you can look for the electrical components that connect the two.

How Do RV Batteries Get Charged?

So there are two battery banks in an RV, the “house” batteries, or the “chassis” batteries. The house batteries power the internals of the RV (like the lights), and the chassis batteries powers the engine of the RV.

Do RV Batteries Charge While Driving?

Regardless of whether your chassis engine charges while plugged into shore power, both the house batteries and the engine batteries are designed to be charged while driving your RV.

This works the same way your car charges its battery when you drive. The alternator converts the power from the gas engine to electricity.

Dangers of Overcharging/Undercharging Your RV Batteries

Just like any type of battery, you can run the risk of not charging your RV battery enough or charging it too much. In both cases, you’re liable to run into difficulties in the future if you’re not careful.

Overcharging: Should I Disconnect My Battery When Plugged Into Shore Power?

Leaving your RV battery plugged in for long periods can be dangerous. even after it’s fully charged can be dangerous. If your battery is already charged, you can disconnect the battery to prevent overcharging.

It can deplete the battery cells’ electrolyte levels. This harms your battery’s performance and leads to a reduction in its overall product life.

Some people recommend to charge your batteries and then putting the battery disconnect to the OFF position so the batteries will maintain charge for as long as possible, and thus preventing an overcharging situation.

In short, it’s a delicate balance of not leaving your batteries charging indefinitely but also not allowing the battery charge to dip too low.

Lithium ion batteries don’t have these same problem, but shouldn’t be depleted 100% all the same.

When you undercharge your battery, you risk getting stranded with no power source to bail you out. It could also lead to difficulties in starting your engine.

It’s better to recharge your battery often rather than leaving it until it’s completely depleted. A good rule to follow is to use 50% of your battery charge, then recharge it each day.

This way, your battery can last twice as long as if you regularly discharge it to 30% or lower. Are you wondering how long RV batteries last? Check out our article, here, where we go into more detail on that.

Most of the modern RV batteries feature an LCD display. It reads out all the important data regarding your RV battery.

There are simple, yet reliable, types of battery monitors, such as the AiLi battery monitor. It makes checking your battery’s data easy to read with a quick glance at the LCD display.

Some upgraded monitors show other readings as well. For example, the Victron BMV-712 battery monitor includes a temperature sensor. It’s Bluetooth compatible, which makes it easy to track via your smartphone. 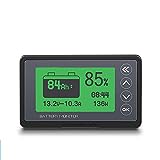 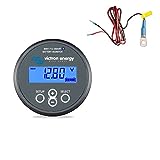 All RV batteries are made up of two different systems. There’s the 12-volt direct current (DC) system. Then, there’s the 120-volt alternating current (AC) system. That’s not taking into consideration the actual engine battery that drives the RV itself.

These two electrical systems are connected. If the RV is connected to an external AC power source, it’ll charge up the batteries and enable the DC system. This is done via a converter.

The DC system runs on the battery system in your RV. It’s capable of powering the water pump, fans, the TV, and even your RV lights. Yet its power is limited by the amount of energy that can be generated by your RV batteries.

The great thing about this power system is that it’s easy to work with. It recharges when it’s hooked up to an external power source. It also charges when you run a generator or when you’re driving your RV.

Another handy tip is that the DC battery system can be used even if the RV isn’t hooked up to any power source. Just keep an eye on the charging level of the battery to prevent overheating.

Also, try not to let it die completely before recharging it. This can compromise the integrity of the electrical system.

This is the more powerful system of the two. It’s used to operate the large appliances in your RV, such as the fridge, microwave, and air conditioning. The AC power system also operates the power outlets in your RV.

In order for this battery to run, you have to be connected to an external power source. There are two types: a generator and shore power.

Using an electricity RV generator is a great way to operate a heavy electrical load. The best part is that there’s minimum to zero risk. Your battery stays safe and your electrical system isn’t being overloaded.

Then there’s shore power. RV shore power is when you connect your RV battery into an AC electrical grid. You can usually find these at most developed campgrounds.

It’s a convenient way to recharge your batteries. You can also use shore power to directly run the RV’s electrical system.

Now that we understand how RV batteries charge when plugged into shore power, it’s time to head out on an RV adventure!

But before you go, remember to take proper care of your RV battery. Never let it undercharge or overcharge. Both scenarios can end up damaging your battery. You also risk damaging your entire electrical system.

link to What Is A Sleeping Bag Liner And Do You Really Need One?

Continue Reading
link to What Material Is Best For Hiking Socks?

Will your typical socks do the trick, or are there better socks to hike in? The best materials for hiking socks include wool in combination with synthetic materials like Polyester and Spandex....