Camping is the perfect time to head outdoors for some great relaxation under the stars or by the lake. But you might be wondering if you could be bringing home a few hitchhikers such as bed bugs, lice, or other creepy crawlies while you are out camping?

The good news is that bedbugs and lice do not live in the forest, so you won’t have them crawling into your sleeping bag with you at night. Unless a fellow camper brings them along! But there are a few other insects that you might need to watch out for.

Which Pesky Bugs Can You Get While Camping?

Everyone knows mosquitos love to pay a visit while you are camping and along with them come a variety of other pesky insects like no-see-ums, blackflies, and midges. But thankfully most of those don’t follow you home unless they get stuck in the car.

An entirely different type of problem are those little critters that hitch a ride back to your house to multiply and become, dare I say it, an infestation?

It is possible to pick up a few insects that may make you remember your camping trips as the worst mistake you ever made. Bed bugs, lice, and a few other creepy crawlies can infest your camping gear to become your worst nightmare at home. But only under certain circumstances, so you might not have anything to worry about.

Once they infest an area, bed bugs live in creases, folds, or hidden areas like between mattresses, only coming out to feed. What they eat is blood, specifically a blood meal which is required to lay fertile eggs and multiply. That could mean biting you or your furry companion!

So yes, a sleeping bag with its folds and dark interior is a great habitat for bed bugs, but only until you get inside. The funny thing about bed bugs is that while they love a warmblood meal, they really don’t like a lot of warmth or being inside a person’s clothing. Ironically you technically “wear” a sleeping bag, making the actual habitat less than ideal for the insect.

Are Bed Bugs Common Outside?

The good news is that bed bugs are not a common outdoor insect. In fact, you won’t find them on the list of creatures to watch out for at any campground. They prefer to exist near people, because we are their food source. So you won’t find them crawling out of the forest to invade your tent like an army of ticks.

The good news is that picking up bed bugs while camping is extremely uncommon. You’ll most likely encounter common outdoor pests like mosquitos, blackflies, chiggers, ticks or no-see-ums. Bed bugs are mostly a human habitat problem, except…

How Can You Get Bed Bugs While Camping?

To pick up bed bugs while camping means you must come into contact with bed bugs. The most likely way this will come to pass if you are spending time camping with someone whose home already has bed bugs. Yes, the most likely culprit is your camping buddy!

If the person sharing your tent brings bed bugs with them tucked into their sleeping bag, clothing or backpack, they will migrate into your belongings and come home with you. Or if you are using a camping shelter or cot where the person who slept there before you had bed bug infested gear, you might pick up a few hitchhikers. However, you won’t get them from simply being outdoors in the forest.

Which State Has the Most Bed Bugs?

Since your most likely way of getting bed bugs is from your companions, you might wonder which states have the worse infestation rates. In general, Massachussettes, Rhode Island, New Jersey, Maryland, California, Florida, Ohio and North and South Carolina have the worst reported incidents with Ohio topping the list as the worst in the country. However, every state has reported issues.

To really determine your chance of picking up bed bugs from your tent mate, you can check the reports of bed bug contamination in the city of each of your friends. Or you could just ask them before bunking side-by-side. No guarantees of honesty or remaining friends!

How to Avoid Getting Lice While Camping

Bed bugs are just one of the possible insects that might follow you home from a camping trip. Lice is another possibility and just like bed bugs, will only come about if your camping companions bring them along in the first place.

Despite common thinking, lice do not thrive in unsanitary conditions. So no matter how much you or your best friend showers if one of you has lice, you might both have them by the end of a camping trip. Just like bed bugs, head lice feed off our blood but they live on our scalp. Lying in close proximity to someone’s head, like while camping, can result in lice transferring from one person to the next. This is how they spread.

The best way to avoid bed bugs while camping is to not share a tent or to make sure your camping partners do not have lice in the first place. But at least you won’t get any from sleeping under the stars on the beach.

What Bugs Can You Pick up While Camping?

Lice and bed bugs will only go home with you if someone brought them along in the first place, but that isn’t true with all irritating insects. There are some insects that can be found in the forests or lakes that will hitch a ride and cause you problems.

Fleas are commonly found outdoors and are not isolated to your furry friend, though they will be the first victim. Fleas live on every creature from fuzzy bunnies to mice to people. Avoid sleeping in areas where there are lots of creatures sharing the same space like packed shelters where dropped food might feed a large colony of mice. Flea collars or medication can help keep your four legged companion safe, as well as your home when the trip is over.

Ticks are another insect that can find their way into your tent or clothing and then home with you. While ticks might not cause an infestation in your house, a tick bite can deliver numerous types of bacteria, leading to a variety of illnesses. Lyme’s disease is the most well known but hardly the only one to worry about. Sprays like Pyrethrin can keep ticks at bay. Check over yourself for any ticks and shake out clothing to see if any are holding on to bite you later. Don’t forget to check any four legged companions and use preventative medicines is possible.

Chiggers are a small, nearly microscopic insect that cause itching and rashes. Though not fatal, the itching is worse than poison ivy and will cause no end of irritation until dealt with. They live in moist areas, often at the edge of forests. The most likely place you will get them will be on your feet and ankles. The good news is that most over the counter corticosteroids will stop the itching. And don’t believe the reports on the internet that they burrow under your skin and lay eggs. It isn’t true and you won’t become a walking chigger infestation.

As anybody who has a porch light has discovered, light attracts many different types of bugs? Have you ever wondered whether the color of the light impacts how many bugs are attracted? Maybe this video will help you decide on what headlamp to get (this is the one I use, and it has a decent red light mode)

Most bugs you encounter while camping will be the sort that a good dose of bug spray will keep at bay. They won’t follow you home and cause you to regret ever going camping in the first place. With a few precautions, mostly checking that your camping buddies aren’t bringing some uninvited guests in the first place, there is no reason not to head out to your favorite spot and enjoying the great outdoors.

link to How Long Does a Sleeping Bag Last?

Trying to find out how long you'll be able to use your sleeping bag? You're in the right place to discover how long a sleeping bag can last and what you can do to keep it in great shape for as long...

Continue Reading
link to Stinky Sleeping Bag Even After Washing? How To Fix

A stinky sleeping bag can be a real hassle. Find out how to get rid of the stink here! If your sleeping bag still stinks after washing, you can try a cleaner that is more specialized for... 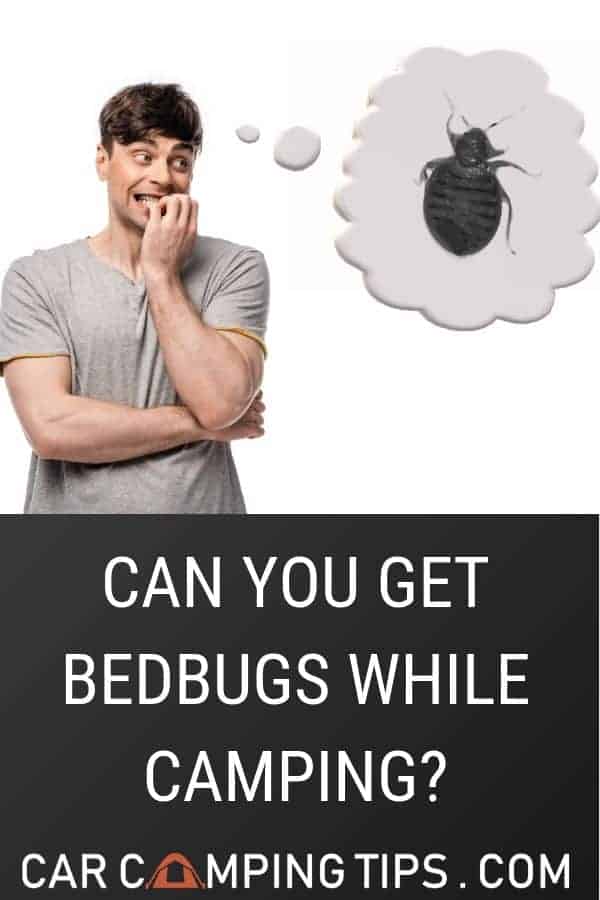