When we talk about budget fishing reels, the names that come up usually include KastKing, which rightfully gained its place among the most popular manufacturers in the industry.

Kastking brand reels are often considered budget-intermediate reels offering similar features to more expensive brands at a lower price. Opinions vary on their longevity and their quality, but many fishers successfully use Kastking reels through many seasons.

The company has proven to be a noteworthy opponent. Not only because of its products’ top-notch quality but also because it provides you with premium features that other companies would charge you double for.

Check out their website— sometimes they will send you deals that are cheaper than what you can get elsewhere.

KastKing reels are among the best on the market for a number of reasons. For one, they’re budget-friendly, compared to other brands. Despite that, they’re packed with useful features, and they’re designed using high-end materials.

KastKing reels come with top-notch ball bearings that stand out among the other brands for their smoothness and agility. Additionally, the reels are suitable for both beginners and professionals. In fact, their ease of use can turn anglers into pros. Not to mention that they have the KastKing Intrusion Shield System that protects the reel’s body from the water.

The most common complaint about KastKing reels is their durability, but it’s a controversial factor.

Some users reported that minor mechanical issues appear when they use the reel, but they’re easily repairable. On the other hand, some new buyers have doubts about the reels’ life expectancy because, in their words, the price is too good to be true.

All in all, KastKing reels are worth their cost. They’ll do just fine, considering the price tag they come with. Plus, they boast a powerful drag and a solid frame. The longevity may not be as you expect, but that’s the best you can get at this price range.

A Summary of KastKing Fishing Reels

KastKing releases four lines of reels, including spinning reels, casting reels, spin-cast reels, and round baitcasting reels. Here’s a summary of each one of them.

KastKing produces spinning reels for spinning rods. These rods are ideal for beginners because they’re less prone to tangle. They have narrow spools that only work for short distances.

As for the reels, they’re suitable for catching light fish. They sit right below the rod in a perpendicular position. 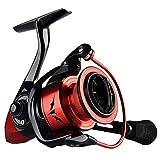 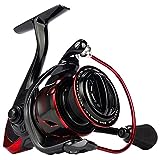 If you’re interested, check out our article detailing some spinning reel examples for saltwater fishing!

Casting reels aim for long-distance precise casts. They go with casting rods because these rods need a powerful drag, along with an extensive line capacity. Most casting reels come with a trigger, unlike spinning ones.

If you’re thinking of using a casting reel with a spinning rod, we recommend against it. You’ll be putting the rod at risk because it’s designed to handle gentle reels. 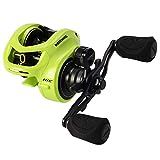 Spin-cast reels are similar to spinning reels, except that they come with a spool that sits in-line with the rod axis. Additionally, these reels don’t rotate; the line unspools on its own.

Spin-cast reels are suitable for beginners because they’re easy to use. They feature a button that unspools the line instantly. Besides, they’re tangle-free, thanks to the plastic housing of the line. 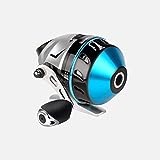 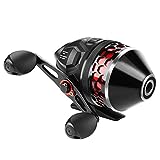 Casting reels are either low-profile or round. Round baitcasting reels are great for handling large fish species. They provide a much more solid drag, which lets you fish big without feeling too much torque. Not to mention that they can cast longer distances than low-profile reels. 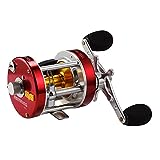 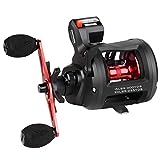 Between all the fishing reels that KastKing produces, there are a couple of reels that are praise-worthy. Here’s a review of each of the best KastKing fishing reels. The links are to Amazon and KastKing. (sometimes you can find deals on KastKing’s website)

KastKing Brutus Spincast Reel (or get it HERE from KastKing)

The Brutus is one of the best budget-friendly reels that KastKing offers. It’s an ideal choice for beginners who still can’t handle a casting reel. It provides light settings, yet gives a solid drag power. Not to mention that its bail and crank are as smooth as a piece of butter.

The Brutus isn’t cut out for long casting distances, but we have physics to blame for that. All in all, it gives a great value of money. You won’t find a reel in the same price range that offers the same features.

KastKing Sharky III Spinning Reel (or get it HERE from KastKing)

The Sharky spinning reel has it all: the affordable price, the impressive drag system, and the attractive looks. Its drag system consists of carbon fiber disks, which contribute to its smoothness and support.

The Sharky features the KastKing Intrusion Shield System. Its job is to keep the dirt out and protect the body from the water. The body consists of durable reinforced graphite that’ll last as long as you have the reel.

Furthermore, the anti-reverse feature on the Sharky is on point. It effectively prevents the reel from rolling backward and tangling in the process. We’d have preferred a higher gear ratio, but we can’t complain about Sharky’s price tag.

KastKing Speed Demon Elite (or get it HERE from KastKing)

The Speed Demon Elite is KastKing’s iconic production. The company prides itself on the retrieval rate of this reel. The 9.3:1 ratio of its gears puts similar options to shame. Not to mention that the carbon fiber material of the drag system adds a valuable sturdiness.

The Speed Demon comes with a durable spool that can handle longer distances than most KastKing reels.

KastKing MegaJaws Baitcasting Reel (or get it HERE from KastKing)

The MegaJaw was designed to scare competitors out of the water, and that’s exactly what it did. It’s a perfect reel for people on a tight budget. For one, it has a maximum setting of 17.6 pounds, which is quite impressive for its price point.

Moreover, the MegaJaws comes fully equipped with carbon fiber discs that provide decent holding power. Not only that, but they also play a major rule in the smooth releasing action of this reel.

The only downside to this reel is the small spools. However, you can live with that, considering the line capacity is still good.

A Sneak Peek Into KastKing’s History

KastKing started as a group of college buddies in 2011. They took a break from their MBA studies and decided to explore fishing. Armed with their borrowed fishing equipment, rented boats, and high hopes, they managed to create one of the most eminent companies for fishing reels.

The manufacturers aimed at creating innovative affordable equipment for fishermen. Their purpose was to cut the fishing cost by 30%, so everyone can enjoy the activity. Now, they have deals with a bunch of widely recognized suppliers, such as Shimano, Walmart, and Cabela’s.

So, are KastKing fishing reels any good?

To sum it up, KastKing fishing reels are worth every penny you’ll pay for them. They’re available in a wide array of models, so you can view your options and choose your best fit.

KastKing makes reels for both beginners and professionals. Plus, it has budget-friendly and high-end options. Therefore, no matter what you want, you’ll find it at KastKing.

Your canine companion may have fur to keep them warm, but they might still need a little help staying warm sometimes. Camping is fun for the whole family, including four-legged friends like the...

Continue Reading
link to Best Knots To Know: 10 Knots To Get You Through Just About Anything

I know how you feel. You run into a situation where you have some rope and something to tie but you have no idea which knot to use. So maybe you force a square knot into the situation or just make...